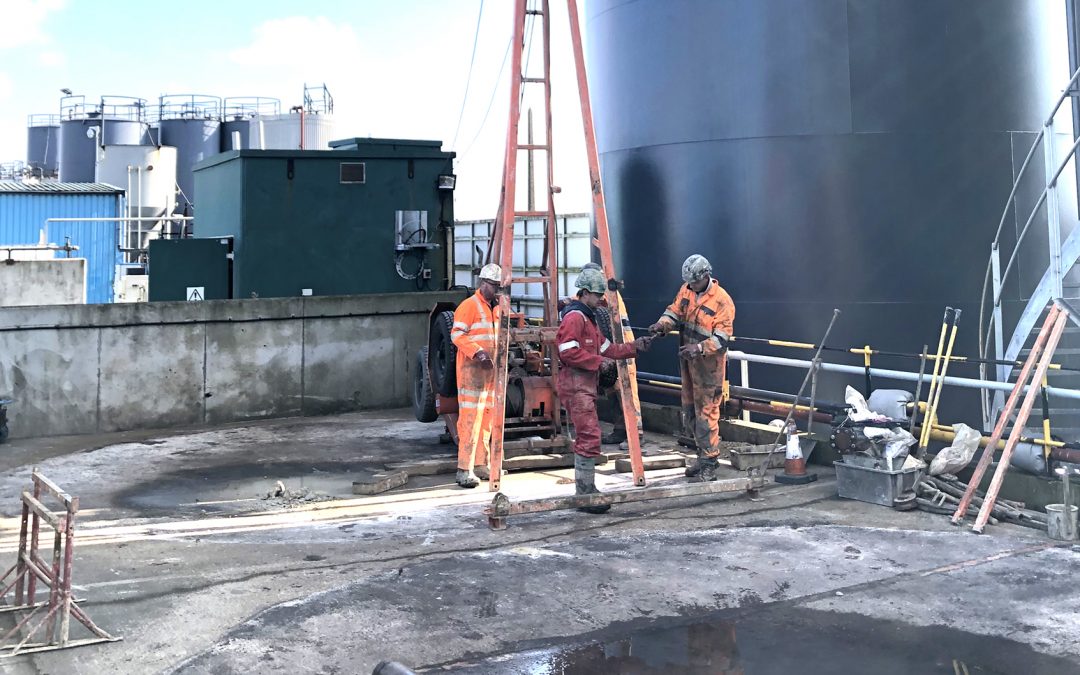 Poor geology, settlement and a wall, makes Ground & Water, adapt and dig deep for its client.

Ground & Water was instructed by a structural engineering consultancy, on behalf of the waste site operator.

The proposed development was to install two Nitrogen storage tanks. Each tank would weigh up to 450 tonnes when full. The approximate load was calculated to be 150kN/m2 per tank, which normally would require the soil upon which the foundations must sit to have a moderate to high bearing capacity.

In March 2019, Ground & Water was instructed to carry out a site investigation at a waste transfer station in Marchwood, near Southampton. The aim was to establish ground conditions underlying the site, to assist our client and its designers in preparing a scheme for further industrial development.

The investigation undertaken would provide parameters for the design of foundations by means of in-situ and laboratory geotechnical testing undertaken on soil samples recovered from boreholes.

The site comprised an area with concrete hard standing surrounded by a 1.50m high concrete wall. This was used as a storage facility for tanks associated with the waste transfer station. In order to sink the boreholes a concrete corer and cable percussion drilling equipment, had to be lifted into the storage area by crane.

Following a desk study of the underlying geology on-site sampling and ground penetration tests were carried under the supervision of our engineer, Darina Jurovskaja. These revealed the site sat on 1.20m of Made Ground, 2.0m of Soft Tidal Flat deposits, 7.30m of River Terrace Deposits, with an underlying Selsey Sand Formation noted from 10.50m bgl to the final depth of the boreholes, 14.0m bgl. A groundwater strike was encountered at 6.0m bgl.

The sheer strength of the Tidal Flat Deposits was very low. The River Terrace Deposits were medium dense to dense, with the Selsey Sand Formation being classified as very dense.

Given the potential for high load induced settlement Ground & Water recommended that the soils of the Tidal Flat Deposits were bypassed by foundations. Although consideration could have been given to ground improvement.

The structural engineers’ requirements for a good Site Investigation and report, were satisfied despite tricky access and poor geology. The weight of the large Nitrogen tanks, difficulties with settlements, meant that the encountered ground conditions had to be critically analysed with respect to the impacts on loading. Spread foundations, due to the complexity of this approach, were considered unsuitable. It was recommended that a piled foundation scheme could be adopted, as it would be more cost effective.
Get in touch Back to case studies
This site uses cookies to personalise content, to provide social media features and to analyse traffic. AgreeLearn More
Privacy & Cookies Policy