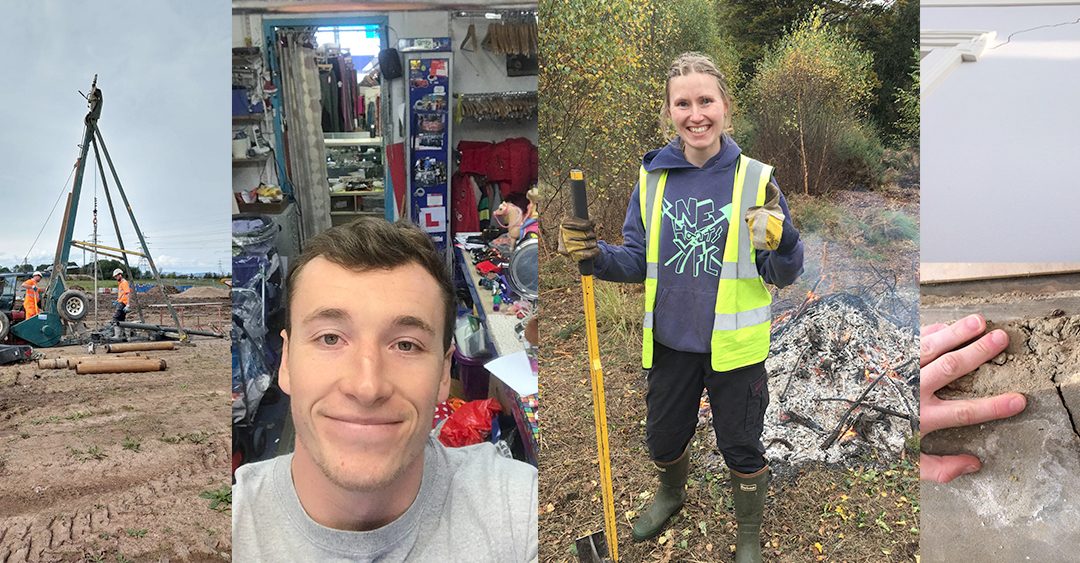 Saving your bacon, out of normal area operations, using technology to progress your planning approvals faster, helping you to cut global CO2 levels and gardening on a grand scale to help a local community have kept the Ground and Water team busy over the last few weeks

Boring alongside the Severn

Investing to help you

DELIVERING QUICK WINS FOR YOU

Following a direct request from a local authority and the NHBC, Ground and Water was approached to help civil engineers establish the potential for chalk dissolution affecting the stability of the sub-surface geology at a construction site.

The results of Ground and Water’s site investigation were combined with the British Geological Survey and other database entries, to provide an overall risk of chalk dissolution at the site. This was combined with standards for the design of soakaways to provide information on the preference soakaway construction and minimum off-sets for drainage features.

Following provision of the risk assessment, the regulator confirmed the civil engineer’s design was satisfactory, allowing conditions to be released and ultimately, getting the developer closer to a build start.

Following a planning application to build a commercial unit, the local authority requested a nitrate budget calculation to supplement the application. The calculation request was in response to EU environmental protection laws, to prevent excessive nitrates entering the water course.

Ground and Water undertook the calculation, which indicated whether the development would increase nitrogen load, compared to the existing and whether mitigation was required.

Our engineers provided a mitigation scheme for the development and it was agreed that an area of re-wilding and tree planting would be included to off-set the increase in nitrogen. More trees also make a small contribution to reducing the global warming risk.

If you were alerted to this news update by November’s update email, you might be interested in the answer to the “What Happened Here?” question.

This is the first in a series on why buildings fail due to geotechnical problems.

Answer: Clearly lacking the level of geological expertise you will find at Ground and Water, in 2007 the Stadtregierung (local government) of German town, Staufen, sunk seven boreholes around the town to tap into geothermal energy. There is a layer of anhydrite under the town, below which is the layer of groundwater. The holes allowed the groundwater to enter the layer of anhydrite, causing it to expand. This caused the ground underlying Staufen to bulge, forming cracks in houses. In 10 years, the town hall has risen and moved by more than 0.5 metres. It is predicted to cost 50 million euros to fix – and the solution remains unclear. There are eight other German towns with similar problems.

Ground and Water sped to the aid of a London basement developer, when it realised the building above the basement it was excavating was moving. It turned out that a previous site investigation and basement risk assessment had missed the extent and depth of Made Ground below the property and the presence of groundwater. Click here to read the full story and how we helped to get our client out of a very tricky situation!

A growing reputation for excellence, sees Ground and Water called out to carry out site investigations on the banks of the Severn Estuary

Clients from further and further afield are calling upon Ground and Water’s expertise to inform planning applications and foundation design. Recently we took off down the M4 to carry out geotechnical investigations and a contamination risk assessment at a proposed industrial site close to the port of Avonmouth. In 2010 the site had been subject to a land raising scheme to reduce flood risk. It became apparent that the fill used had been the subject of an investigation into possible contaminated waste offences. You can read more here

More investments in technology are speeding up approvals for basement developers

Two new software packages created by Oasys, are providing you with a full range of options with respect to Basement Ground Movement Assessments. Output will better satisfy the requirements of basement regulators and assessors; help prevent damage and structural failure during excavations and quickly and effectively communicate the results to you.

PDisp: Pdisp software is used for elastic analyses based on geology and inputted load and pressure releases. The software creates a 3D model of complex geologies based on their elastic parameters. Also modelled are load inputs and removals and displacement grid lines, which can be modelled across three axes. Once the model has been finalised, an elastic analysis is undertaken, and settlement and heave can be calculated.

Following on from June’s team beach clean, the team at Ground and Water is now looking at ways individuals can help out in the local community.

Emily gardens on a grand scale

On Monday 21 October, Graduate Engineer Emily Murray volunteered with the Surrey Wildlife Trust to fulfil her Corporate Social Responsibility day. Emily was tasked with mixed scrub clearance within a lowland and woodland environment, at Royal Common in Elstead. This involved removing small silver birch saplings using the wonderfully named ‘Tree Popper’ tool. The day finished off with a bonfire for the removed vegetation. Emily had great fun during the day and even bumped into her master’s degree dissertation tutor who was also volunteering.

Aubyn hangs out at the YMCA

On Monday 28 October, Graduate Engineer Aubyn Shortland completed his CSR day volunteering at his local YMCA charity shop in Camberley. He chose the YMCA as it offers a wide range of support to young people across the world in the form of accommodation, training, education and advice. The day started with a brief introduction to the charity’s history, which dates back to 1844. Then it was off to work. This involved sorting the various bags of donated items into categories and weeding out any unusable items (whoever decides to ‘donate’ dirty underwear?), cleaning shelves, rotating stock in the window displays, testing donated electrical items, unscrewing bulbs, replacing batteries and checking for scratch marks on CDs. Overall it was a great day and Aubyn even managed to snap up a couple of bargains for himself.

Look out for the December issue and hear about more ways we have been delivering for you.

Contribute to the newsletter. If you have an interesting case study to share or want to express a view about an industry issue, we would love to hear from you.

Do you have reliance on that report?